I noticed this blog post from Scott Hanselman the other day about Visual Studio Express 2012 for Windows Desktop. This post included a screenshot from the installation program. Something that really took me by the throat is this: 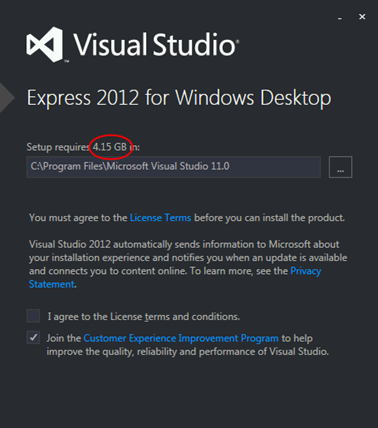 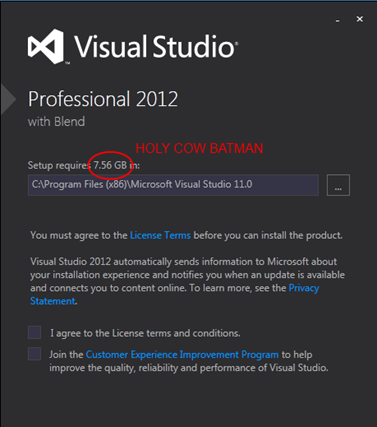 Ask yourself, how on earth can an IDE that requires 7.56 GB to install be fast enough to even be usable at all? What kind of monster machine is required to not even choke to death when I accidentally open a second instance of Visual Studio? We've all seen those dreadful white screens of death, right?

Yes, I know that we're living in 2012 and that disk space is very cheap. Yes, I know that RAM memory grow on trees these days and that CPU power is growing increasingly. But is this kind of footprint justified for an IDE that proclaims productivity? Or is it just me?

After recovering from my amazement I tried installing SharpDevelop, an open-source IDE for building .NET applications. 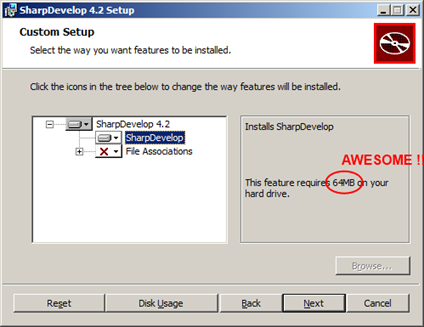 SharpDevelop seems to be more than happy with just a mere 64 Mb of storage. I tried opening a large solution and it loads pretty darn fast. So, I should just shut up and go with SharpDevelop then? See, this is where I have to admit that I have a slight problem.

See, I depend heavily on Resharper for doing C# development. This amazing code-by-keystrokes tool is both a blessing and a curse. Any serious developer who builds .NET applications has to admit that whipping up some C# code without a tool like Resharper is incredibly painful, to say the least. This tool is truly a blessing and this is why I can't go with SharpDevelop as my IDE of choice when building application for the .NET platform. But on the other hand, Resharper is not a stand-alone tool as it needs Visual Studio to host it. To me, this is a curse.

Visual Studio 2012 in it's current form has become too heavily packed with features, which I don't use anyway, so that's it's no longer usable for me to host Resharper. I'm no longer willing to make that tradeoff. I tried using Visual Studio 2012 with Resharper, but I turned back to Visual Studio 2010 after a short while. From a performance point of view, Visual Studio 2010 isn't running great either. So I guess this is just a necessary evil that I have to overcome for building .NET 4.0 applications.

I understand that Microsoft's business model is building platforms and tools for the world to use. It's a business like any other business, focused on earning money. There's nothing wrong with that. This is why Anders is so keen on statically typed languages, because they require more tooling and tooling is what brings in the money for his division. It's as simple as that.

But it doesn't have to be all bad! What if the Visual Studio development team would come up with a stripped down version of Visual Studio? Think about how awesome this could be. What should be in the box? Just the basics! The code editor, the solution explorer, the debugger and the ability to host add-ons. No designers, no SQL Server integration, no TFS integration, etc. … Just the most basic features. That's it! The installation footprint should be no more than 500 Mb, ideally only 100Mb. Wouldn’t that be awesome? This would be would actually solve my current development needs!

I hereby tag my fellow Elegant Coder David Starr, who recently joined the Visual Studio team at Microsoft. You can do it David!  The best is yet to come!

So I'm eagerly awaiting the next release cycle of Visual Studio in order to see whether I'm up for a treat ;-).