IKVM.NET is something I’ve been playing with for a while now, but seeing this awesome trailer today reminded me that I should write a post about it.

I always considered Java to be some kind of parallel universe compared to .NET where a lot of interesting lessons can be learned. I never did any serious Java development throughout my professional career, but I like to follow up on the trends in the Java community. Although the Java community suffers from some of the same diseases as the .NET community, the wide-spread acceptance of open-source and the adoption of new, fascinating languages on top of the JVM is an interesting evolution that I feel is lacking in the .NET world. Although the CLR/DLR is probably better designed to host a wider diversity of programming languages than the JVM, the rise of programming languages like Scala, Clojure, Groovy and others is more sparse in the Java universe. Some of the most useful open-source projects in .NET today  initially started out by porting the code of established Java libraries, like NUnit, NHibernate and Spring.NET, etc. …. Anyway, we’re wandering off.

Did you ever need to interoperate with a Java library while developing .NET applications? I have to admit, it doesn’t come up very often but when it does (especially when using IBM products ;-) ), IKVM.NET might save you from a whole lot of trouble.

Say for example that you’re done with the DateTime class in .NET and you need a library that gives you more power in dealing with dates and time in your .NET applications. You do a little searching on the web and there it is, a full blown API like Joda Time (I’m well aware that honorable Jon Skeet has ported this framework to .NET already, but bear with me).

All we have to do to start using Joda Time in a .NET application is to download joda-time.jar and feed it to the ikvmc.exe command-line tool that comes with the binaries of IKVM.NET. Out comes a full blown .NET assembly by executing the following command:

There are a whole slew of other options that you can specify here, like signing the resulting assembly (who still does that, really), specifying the assembly version, etc. …

This is how the generated assembly looks like in Reflector. 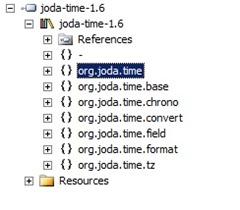 The following block of code is small utility that I developed to deal with the time zone arithmetic for the Europe Virtual ALT.NET.

The distribution of IKVM.NET also comes with .NET implementation of a whole slew of Java class libraries that you can directly use in a .NET application whenever needed. 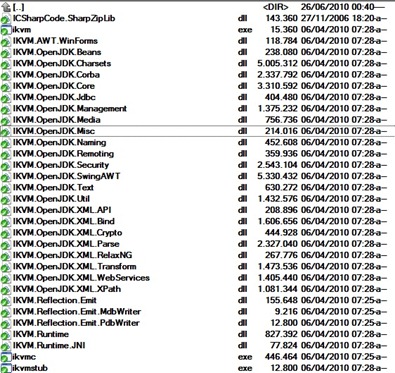 But remember, as with all things that seem too good to be true, there are a couple of major downsides as well. The one that you run into fairly quickly is generics. I tried generating a .NET assembly from Make It Easy the other day and I noticed that some of the types in the resulting assembly where plain classes while they were defined as generics in the original JAR file. The explanation that I found was that Java checks generics only at compile time and not at runtime. In .NET generics are provided at runtime. If the generics from Java would convert to .NET, then every Java compiler warning would produce a runtime error. All the old code would not run. There is many old code in the Java VM itself.

The IKVM.NET blog is a great resource for some of the other interoperability issues you might experience. Maybe this will come in handy someday, who knows?